When To Use Immutable Data Structures

Suppose you are asked this question during a technical interview:

To answer this question, let’s go over some basics first.

To illustrate the differences between mutable and immutable data structure, we are going to implement the queue using an array.

The definition of a queue: 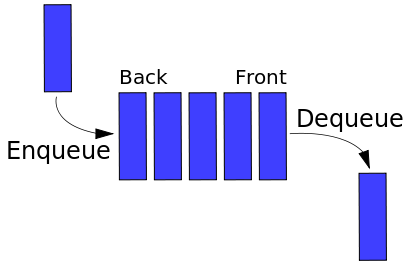 Note, I’m using an array to represent the Queue for simplicity. That’s not the correct way. Queue has the property of O(1) enqueue and dequeue operations. Using an array to represent a Queue results in O(N) enqueue and dequeue operations. A correct implementation of a queue uses a DoublyNode and two pointers for head and tail of the Queue.

Here’s an implementation of the Queue as an mutable data structure.

Here’s an implementation of the Queue as a immutable data structure.

One key difference you may have noticed is that the immutable Queue does not mutate the original queue. enqueue and dequeue functions returns a new queue data structure.

Try out these Queue implementations in repl.

qIm.getData() always returns [] at lines A and B because qIm hasn’t changed. On the other hand, each time we call qM.getData(), we get different results: The call on line C returns [1] and the call on line D returns [1,2,3].

Why is it an advantage to return the same results for the same input? Better predicability, maintability, and less buggy code.

There’s a concept in functional programming called referential transparency forces the invariant that everything a function does is represented by the value that it returns.

Immutable data structures provides referential transparency which makes it easier to reason about our program locally.

Another way to think about it is that every time we execute a pure (referentially transparent) function with the same input, we get the same output. Pure functions do not depend on context (e.g., when you execute function in your overall program) and may be reasoned about locally. On the other hand, functions which are not referentially transparent produce results which are context-dependent, require more global reasoning, are harder to refactor, and are more likely to introduce nasty bugs due to side effects.

At first glance, both Queue implementations seem to have identical behavior and can be used to construct a queue with almost identical syntax using chaining:

However, for the immutable Queue, a new Queue is created each time we call enqueue and dequeue, so that’s four new Queues total to support the four Queue operations. Also we needed to update the qIm to point to the final Queue containing 2 and 3 which was created by the dequeue function.

When to use immutable data structure

Modern client side applications often have multiple components (e.g., parts of the DOM or screens of a single page application) access and making changes to the same shared state. React and redux provides a powerful framework for building rich client side applications which rely on heavily on functional programming techniques. For instance, redux provides an an abstraction for managing shared data by leveraging immutable data structure and a collection of functions called reducers and actions to provide a “single source of truth” to multiple React components.

When to use mutable data structure

In game programming, memory allocation is usually the slowest thing (resource pools are popular in game programming). In games you not only want each frame to process quickly but also for speed to be consistent. The usual symptom of a garbage collector bottleneck is that the game intermittently freezes but runs normally in between. In that case, you don’t want to continuously allocate memory for the new data structure; rather you want to update the existing data structure in place.