by Xiaoyun Yang and Clyde Shaffer

I love indoor plants but I’m bad a keeping them alive. I once had a cactus that died from thirst. I purchased a few Aqua Bulbs, which has been great help in keeping the big plant watered enough for me to get around to taking care of it. However, I can’t use the Aqua Bulb on my smaller plant. Also, Aqua Bulbs break easily and refilling it with water is always a hassle. This motivated me to build an automated plant waterer. Let’s call it ThirstyPlant. The basic idea for ThirstyPlant is that it will leverage a moisture sensor in the soil to actuate a pump that sprays water whenever the soil gets too dry.

Here’s a cartoon of the conceptual design. 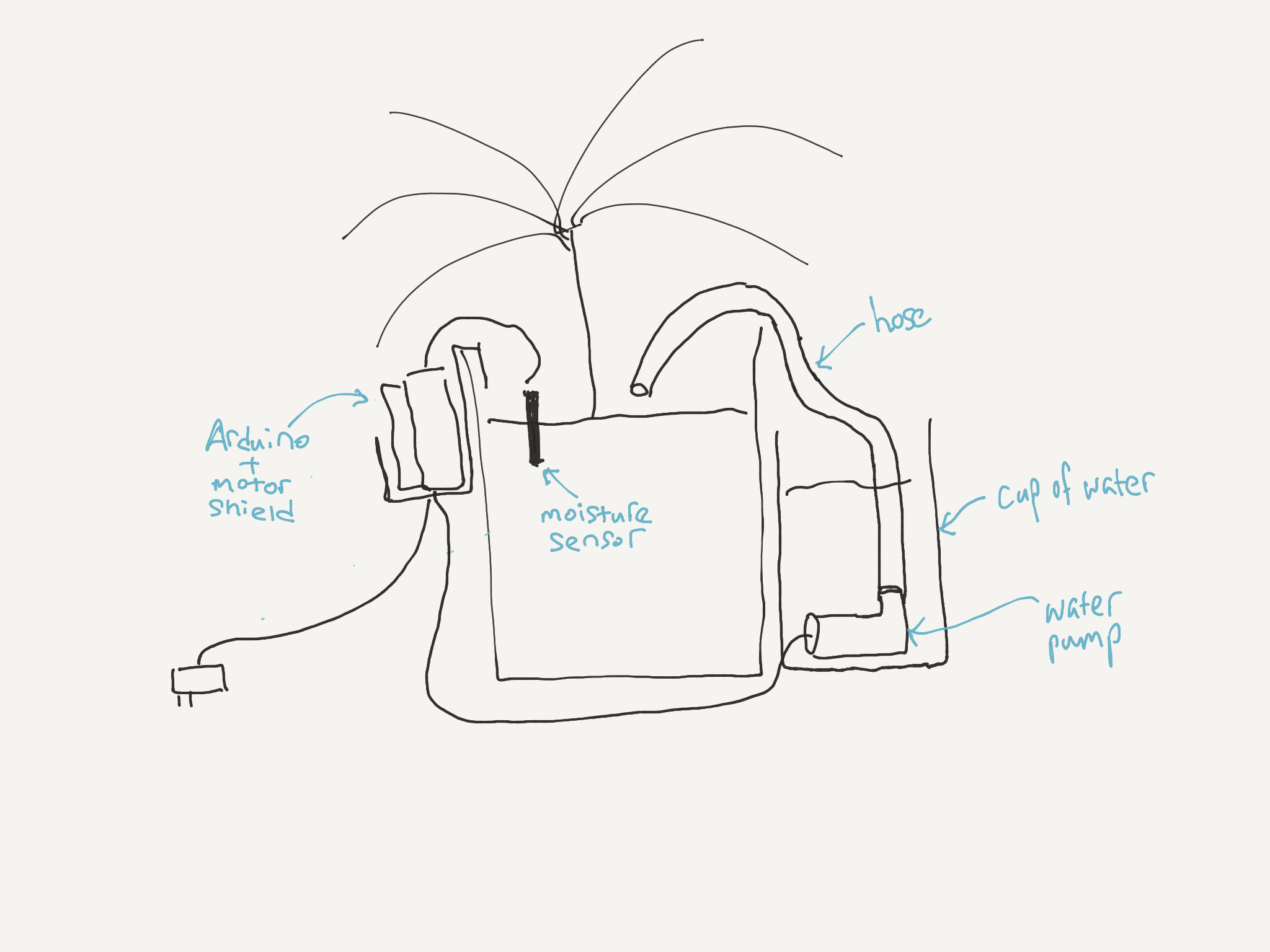 We got a few parts from a hobby store in NY called Tinkersphere. The moisture sensor consists of a PCB with a transistor, an LED, and about a dozen exposed parallel traces. The traces are connected in two groups such that there is no direct connection between any adjacent pair of traces. Normally this means that current cannot flow between the two groups of traces, but in the presence of moisture an electrical contact is formed. As more water accumulates, the resistance of the circuit decreases, and the voltage on the Signal pin of the sensor increases. This voltage is directly compatible with the analog input pins of an Arduino, and can be read with the analogRead() function.

First, we need to use jumpers to plug in the moister sensor into Arduino. 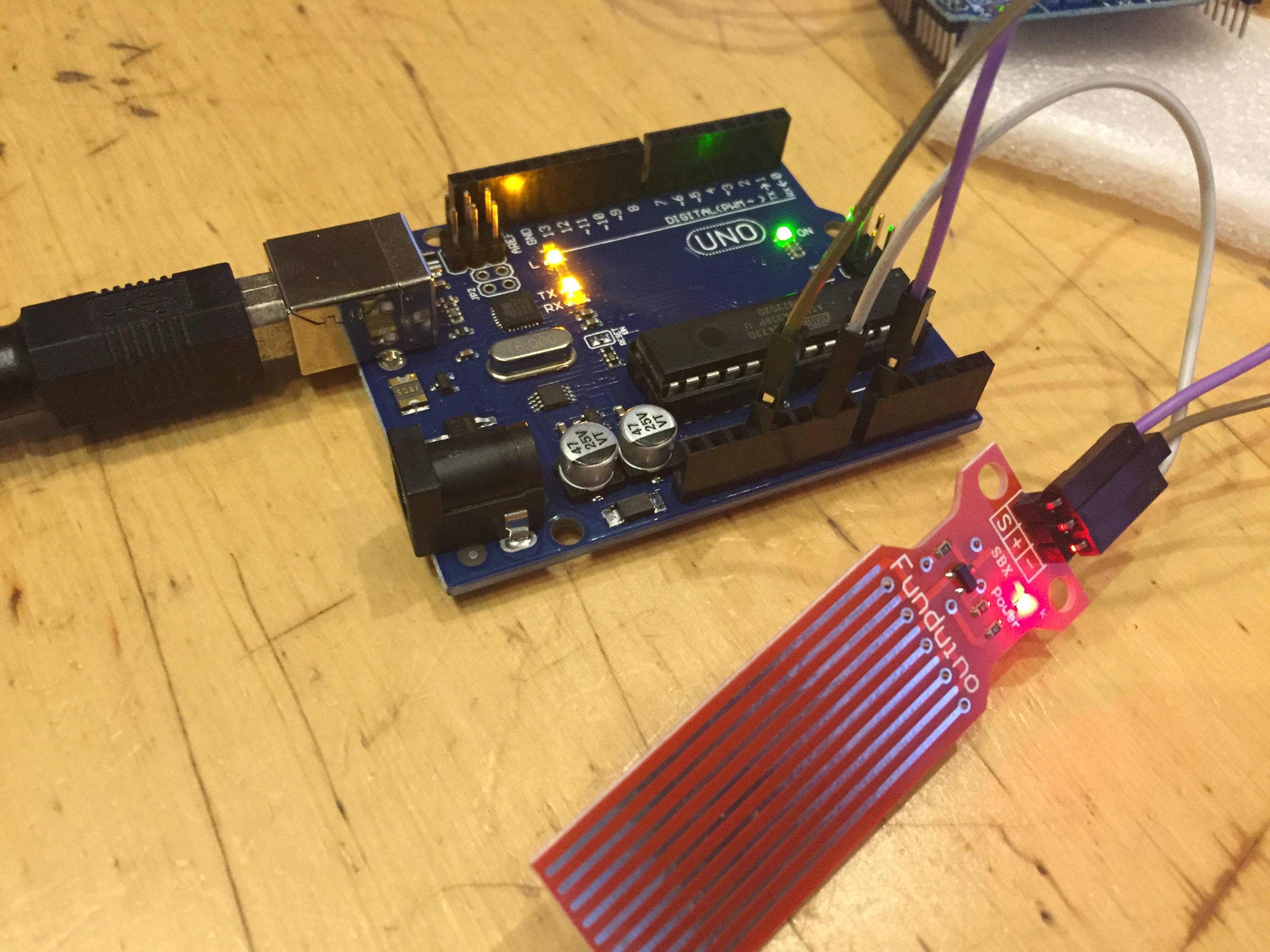 Next, let’s write the code to read moisture level. Follow the getting started guide.

Open Serial Monitor and see that when the moisture sensor is dry, a “water me” message is printed out!

First, we want to mount the motor shield onto the Arduino and plug the DC motor into the screw terminal marked M1 as shown below. Next, we follow the getting started to program the Arduino to control the motor.

This is the result:

We need to solder the pin headers to the +5, the ground, and the analog pins so the moisture sensor pins can be plugged into those. 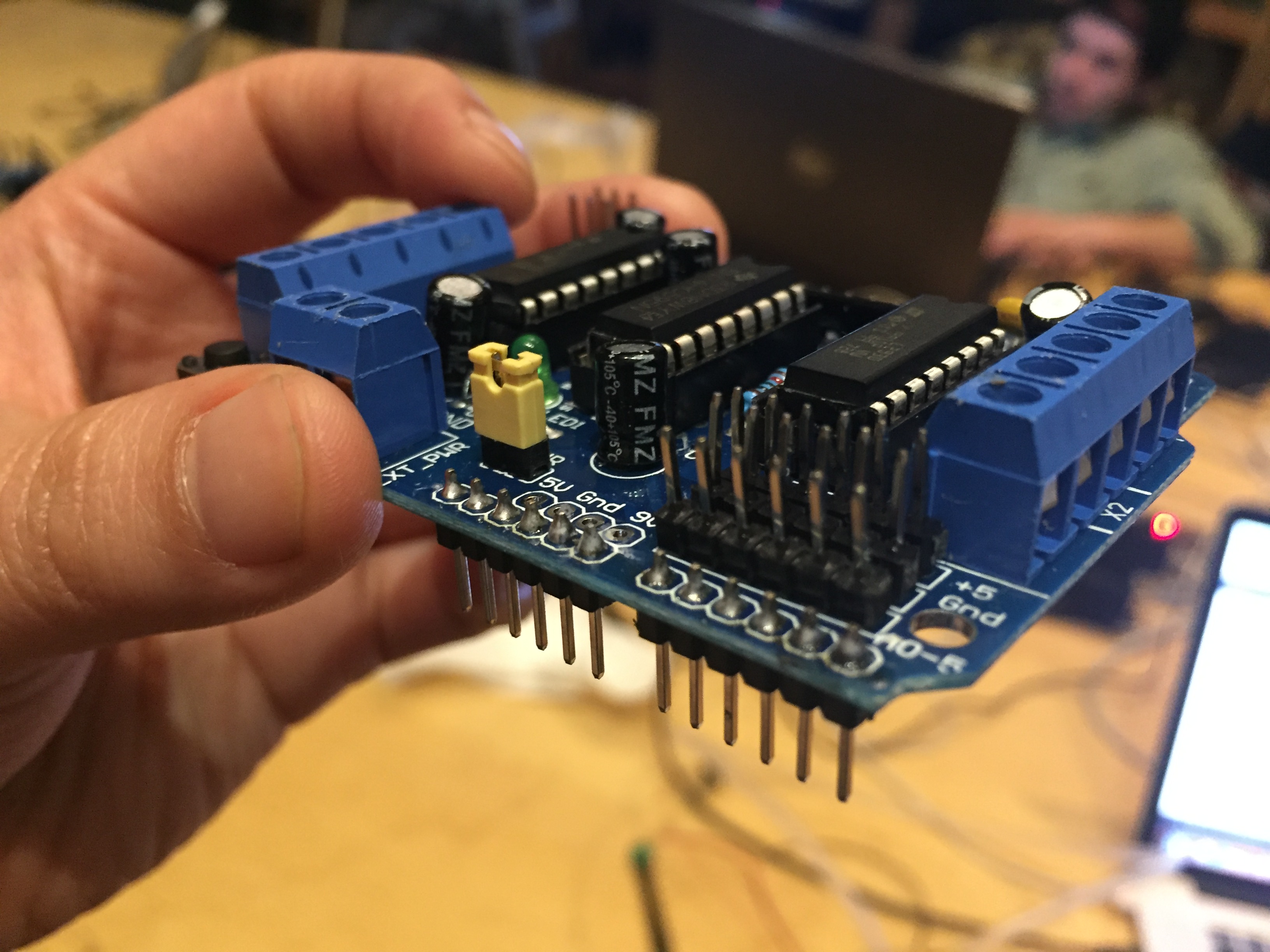 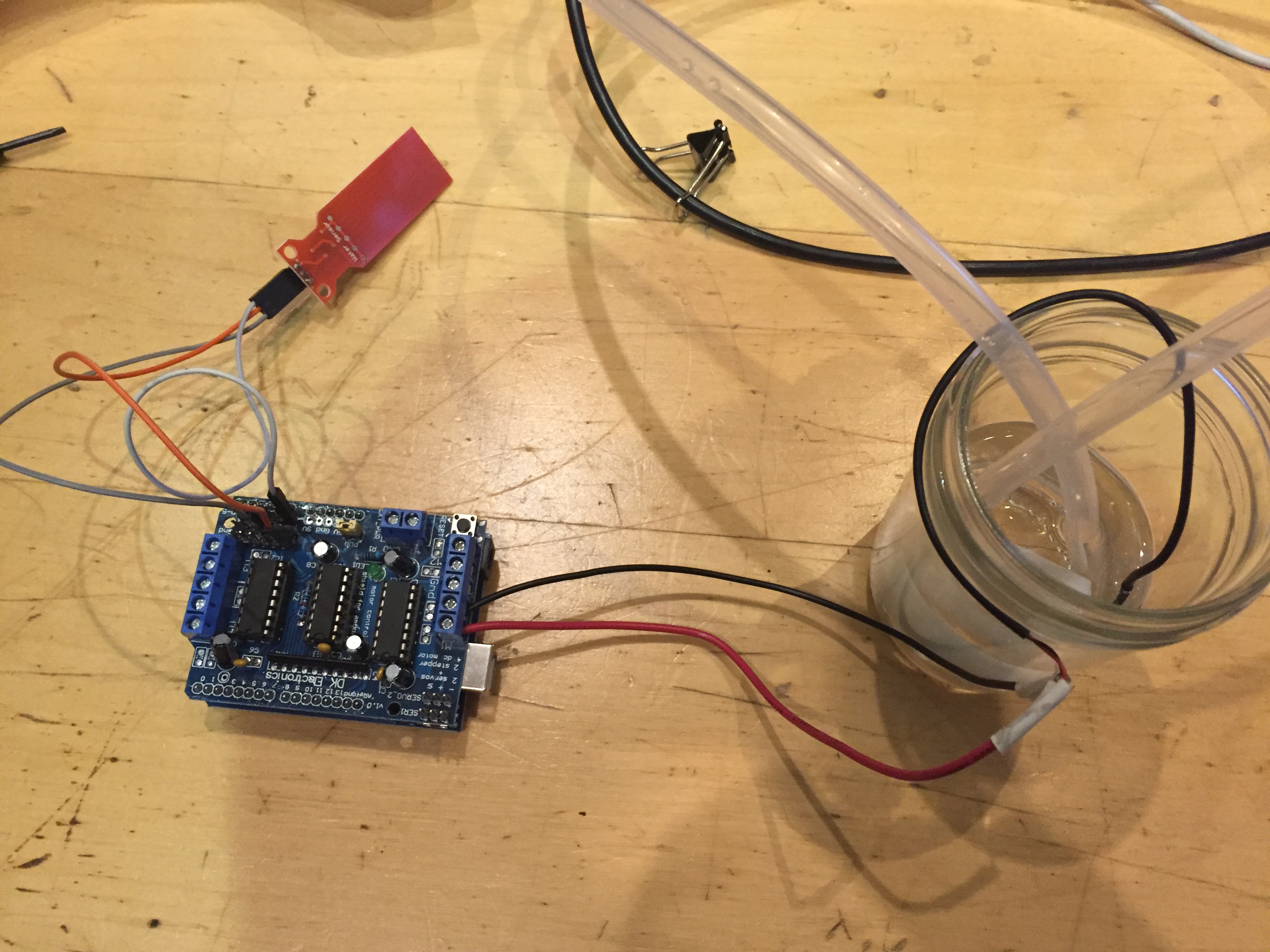 The enclosure houses both the Arduino and the reservoir for the water in two compartments, entirely sealed from one another save for a small passage allowing a wire to pass through to control the water pump. (Which will be protected by silicone sealing adhesive.) The enclosure is designed to be unobtrusive, so it takes the shape of a squat white cylinder with rounded edges. The planter sits on top of the enclosure, and any excess water that falls out of the bottom of the planter is caught by the funnel and returns to the reservoir. This also allows for convenient replenishing of the water reservoir by simply pouring water on top of the device. The main body of the enclosure will be 3D printed, with a laser cut acrylic grating on top. 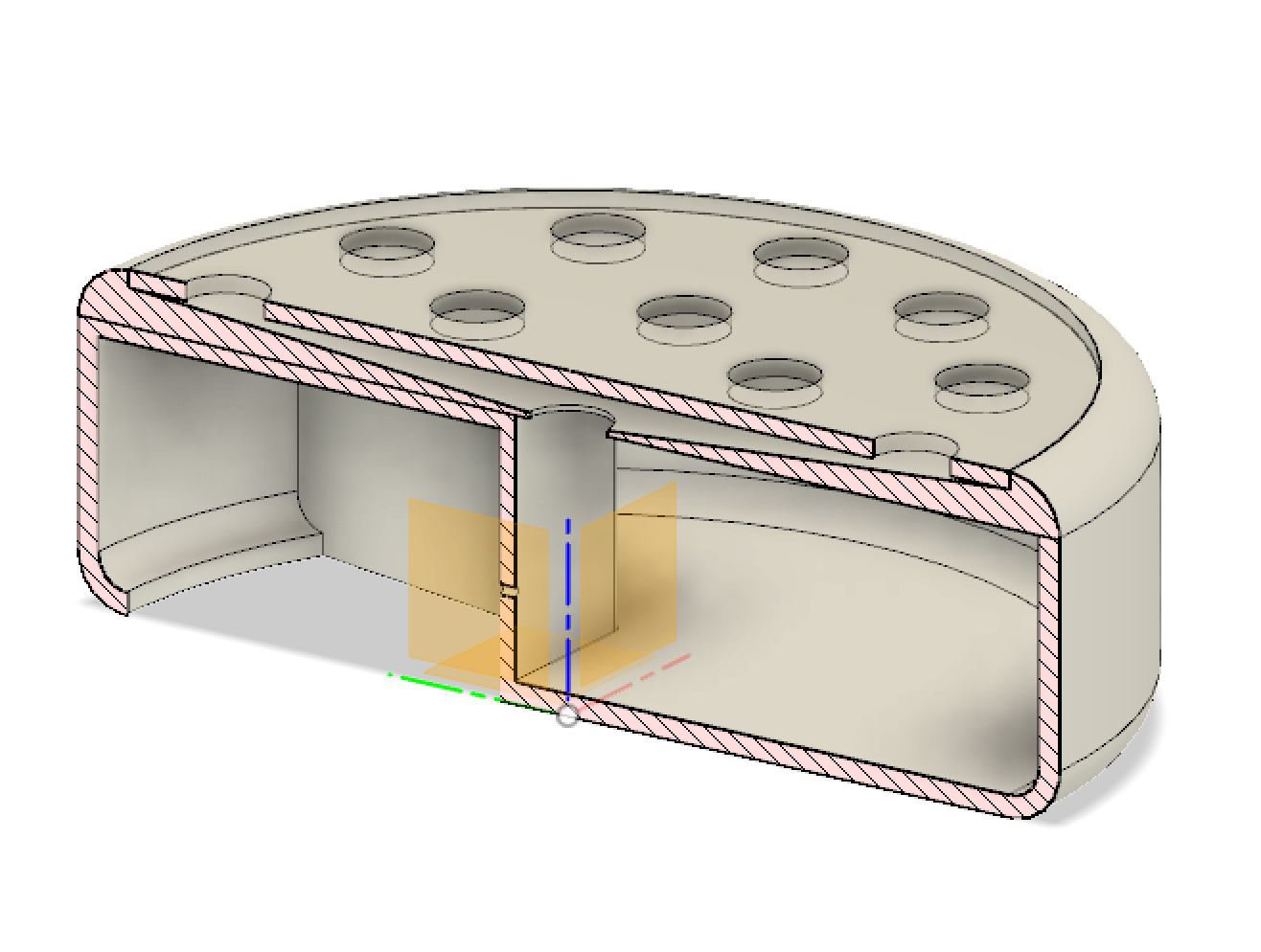 For our first experiment, we start with bone dry soil which produces a reading of 0 on the moisture sensor. Water is poured into the soil approximately an inch from the sensor. We programmed the Arduino with the 100/ms sampling rate.

The Arduino is connected to a serial port on the computer. The following line of bash code dumps the output of the serial port into a file.

30 minutes worth of data is collected. The data in the csv file is then plotted. 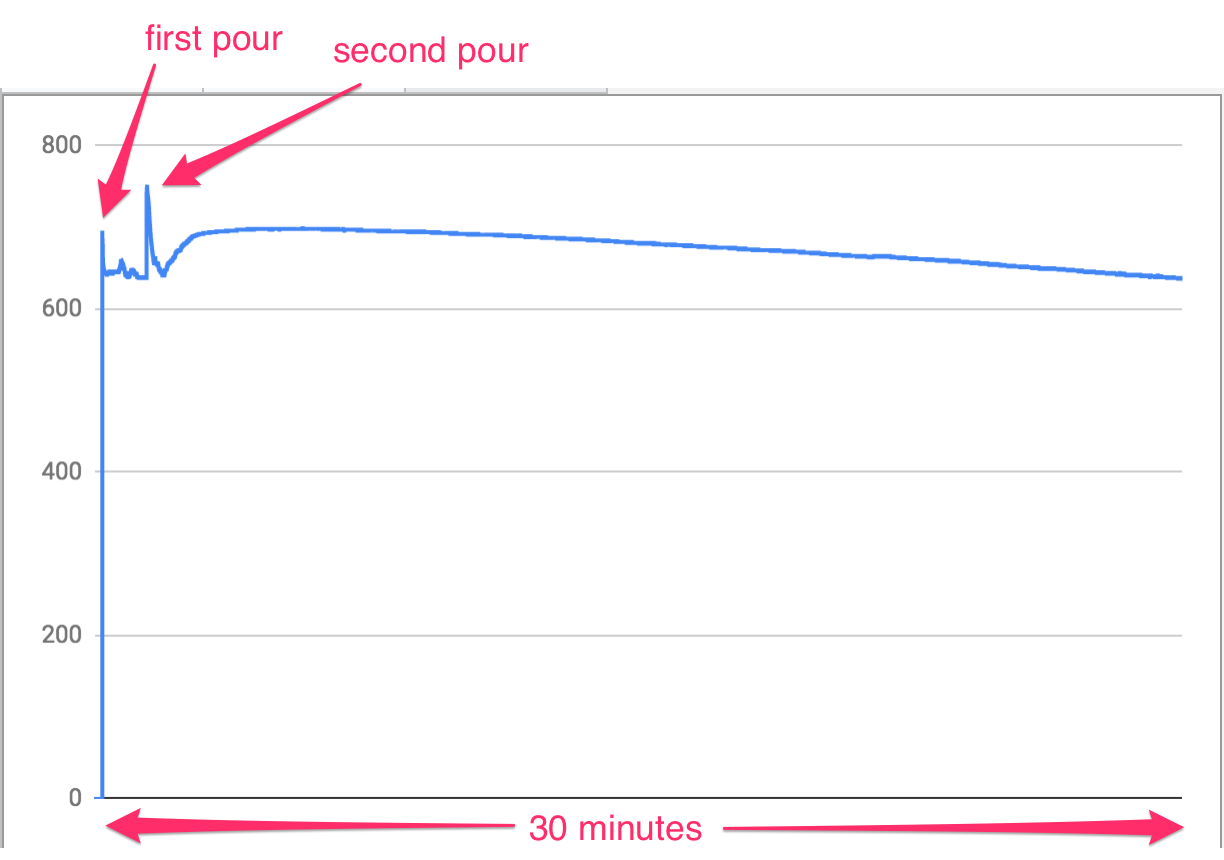