A finite state machine (FSM) is an architectural design pattern that allows us to model a large system as a collection of loosely coupled components. Each component in the system changes its behavior when the internal state changes. This pattern allows us to write flexible, reusable, and testable code. In this article, we will explore the use of FSM in building complex React components.

The primary use of FSM has been in programming embedded systems but in recent years, there has been an emergence of FSM in other applications like managing states in the browser, modeling behavior, and building chatbots. The goal of this post is not to evangelize FSM as a better state management solution than its alternatives like Redux but rather, to introduce a pattern for simplifying the architecture of a system and write robust code that is understandable, extendable, and delete-able.

An FSM consists of states and state transitions. It can be represented by a state machine diagram: 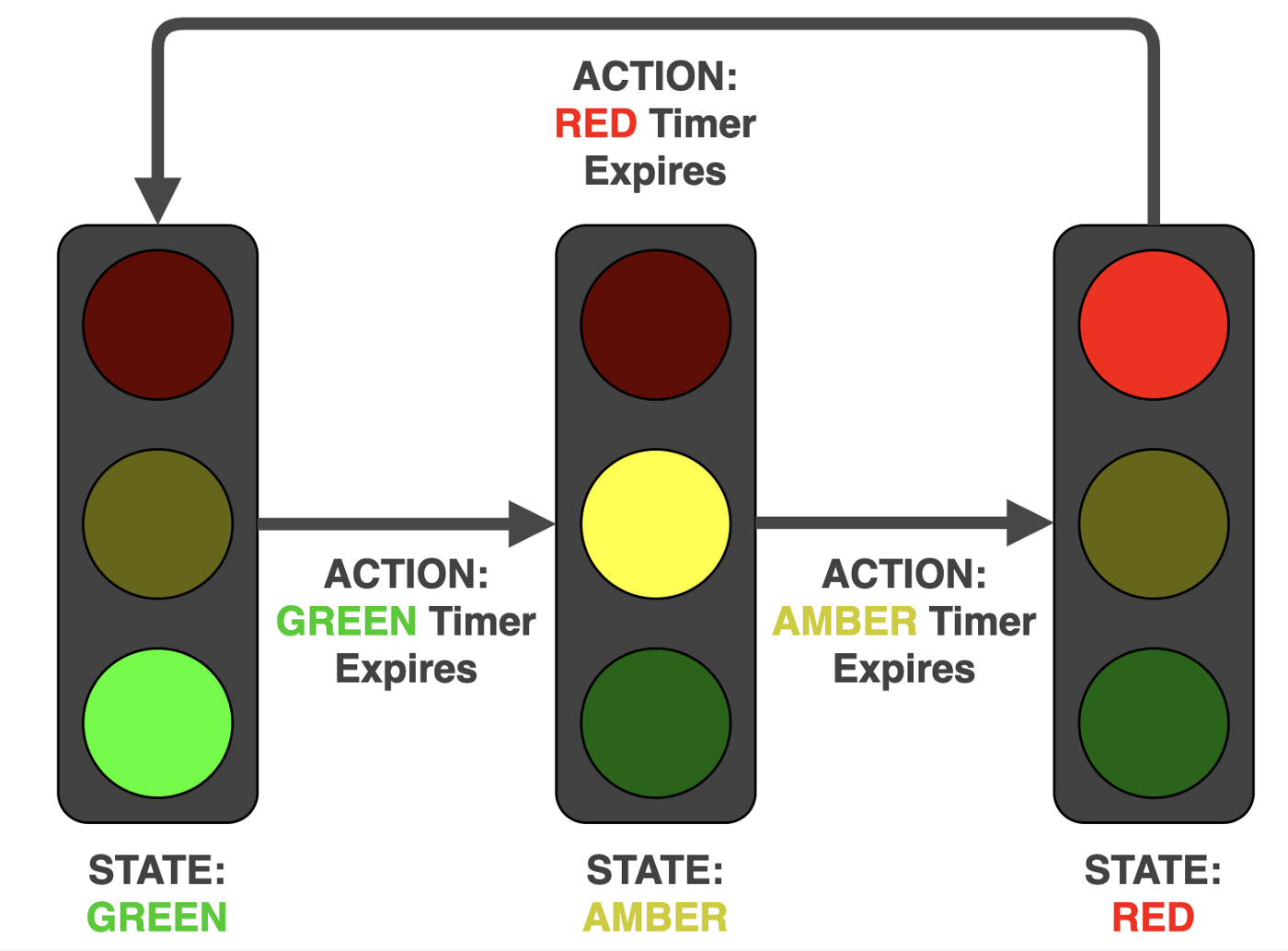 If we model a React component as an FSM, system inputs are provided externally by the user, the server, or callers of the component. These include events, such as a button click or having received a certain response from the server. The output of the system is the JSX (i.e., what is rendered) because that is what is ultimately returned from the component.

Inputs and outputs of a React component modeled as an FSM

Transitions out of a state must be mutually exclusive. That means a given input cannot cause transition into two states. This ensures the deterministic behavior of our system.

A Component with Few States

You probably already have had experience building React components that use component states like isLoading and isDisabled to determine how to render. These are examples of stateful components that can be modeled with a simple FSM with binary states. Let’s apply what we learned about FSMs so far to model a simple stateful React component as an FSM in a concrete example.

Suppose we are building the <FriendStatus> component from the React Hooks documentation. At any given time, this component displays one of the three messages “Loading…”, “Online”, and “Offline”.

The component state isOnline determines exactly what message to render and is initialized to null and updated to “online” or “offline” in the useEffect.

We can rewrite <FriendStatus> to render based on the UI State instead.

The state transition happens in handleStatusChange, which is triggered on every render because the useEffect has no second argument.

The setUiState(nextUiState) is responsible for causing the transition from the current uiState to the next uiState based on the system input (i.e., status from ChatAPI).

Our system output is the message we want to render, which comes directly from UiStateMessageMap. We can do this because our system can only ever be in one of three states. When the output of the system depends solely on the current state, we have a special type of FSM called a Moore machine. A Moore machine is more deterministic but reacts slower to input changes compared to a Mealy machine. In a Mealy machine, the output depends on both the current state and the inputs of the system.

Whether you build a Moore machine or a Mealy machine really depends on the requirements of your system. We will see in the next part of the post how we can build a system that is a hybrid Moore and Mealy machine using an architecture that delegates the implementation of state-driven output to the child components.

A Component with Many States

For simple components that have only two or three states, an FSM may be overkill. There is quite a lot of overhead to implement the FSM (e.g., defining all the UI States and transitions) for not much additional benefit.

For a complex system consisting of many sub-systems with cross-cutting concerns, an FSM provides a huge benefit.

The cross-component dependencies could result in tight coupling of components and make encapsulation difficult and the system difficult to test.

At my company, OkCupid, we’ve built such a component (<LocationSearch>) that lets you specify a country and a query term (zip code or city name) to find a location anywhere in the world. This seems pretty straight-forward until you consider all the edge cases this component has to handle.

If you see this design spec in a Jira ticket, it might seem a bit overwhelming. There’s a lot of logic that needs to be implemented. But having all the functional requirements up-front is actually a blessing in disguise - it enables us to think more holistically about the design of this component and pick an architecture that can effectively manage all of the complexity of this component.

Enumeration of All UI States

A nice thing about working on a cross-functional team with a designer is that you get all the mocks before you start the implementation. The mocks can be used to devise the architecture.

Since this is an article about UI State modeling using FSM, you may have seen it coming. We are going to assign a UI State to each mock, which represents a snapshot of the component in action. 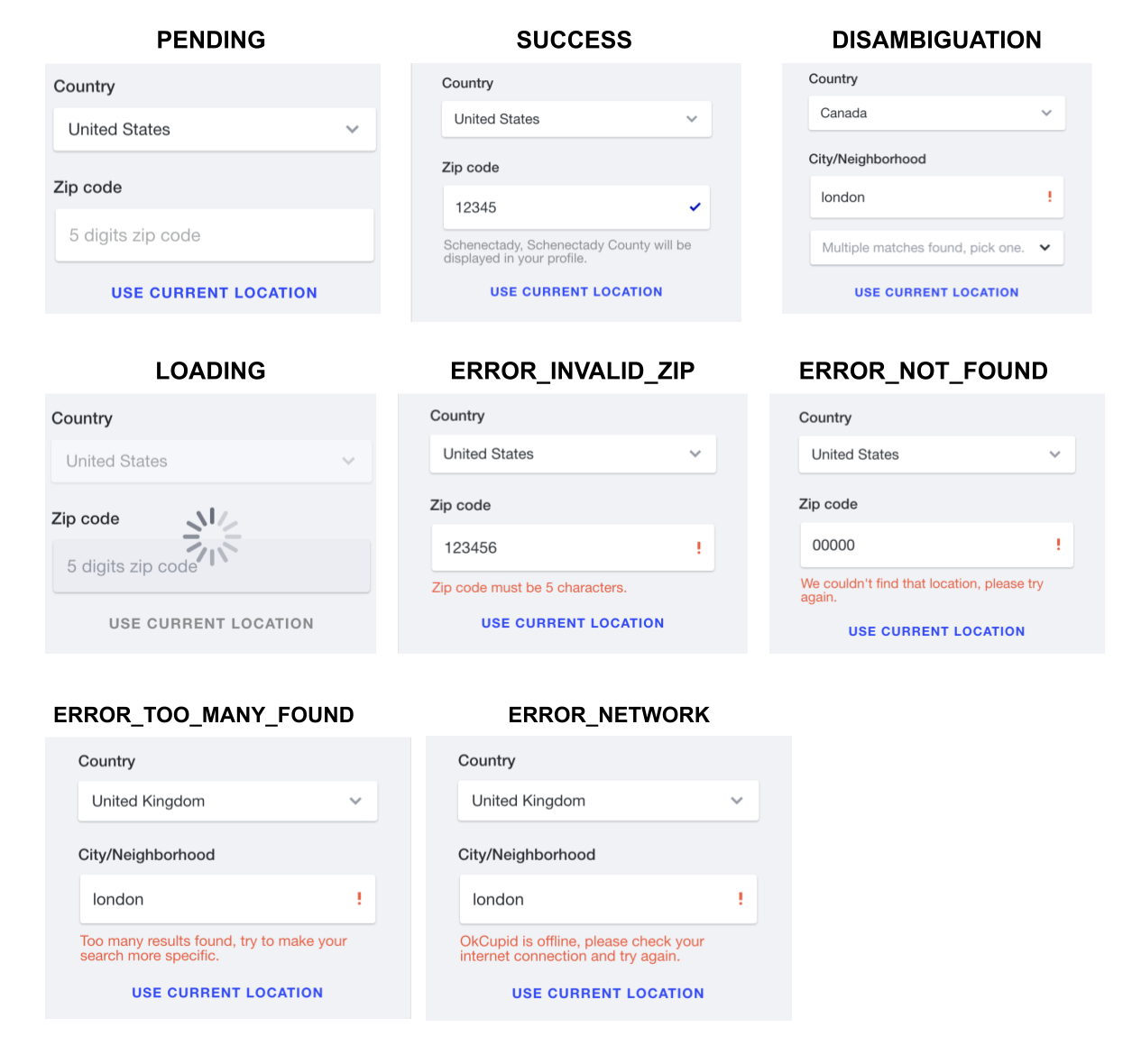 LocationSearch output in every state

These images depict the output of the system (what the user sees) in each state. Let’s take a look at what the outputs have in common in the different states. This will give us an idea on how to split up our <LocationSearch> component into sub-systems.

Based on these observations, we can start to delegate the rendering logic to different presentational components.

Now we’ve defined the states and the output of each state, we are going to specify the state transitions.

Similar to what we did in <FriendStatus> earlier, we are going to instantiate uiState as a component state of <LocationSearch> and mutate uiState in a useEffect. The evaluation of the next uiState will be done in a helper function getUiState. The advantage of making the next state evaluation explicit in getUiState is that we will be able to separate the concern of computing when to render from the concern of what to render.

Recall FSM can be represented as a directed graph and state transitions are the edges between the nodes. This is what our FSM should look like. 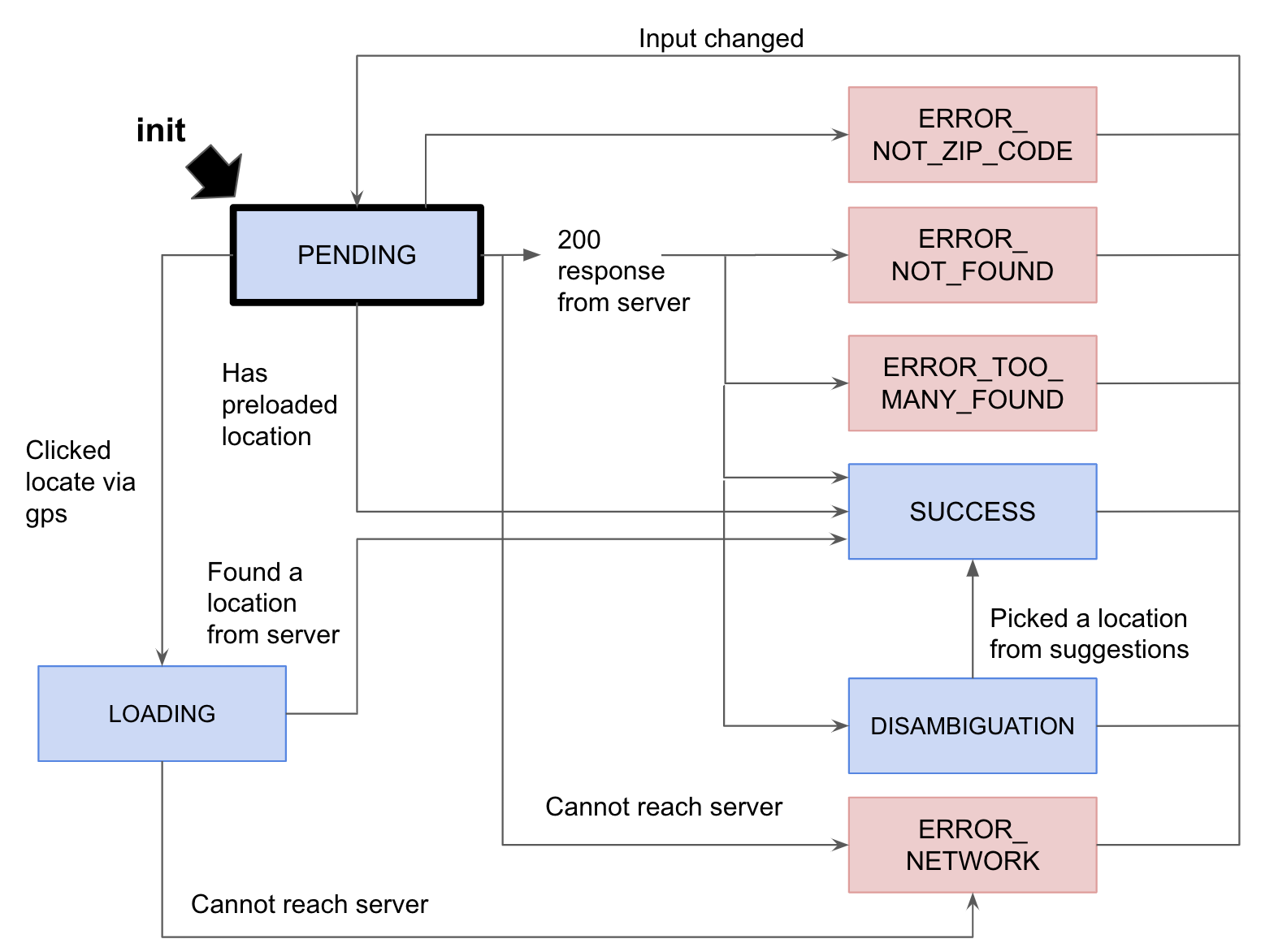 The ERROR_NOT_ZIP_CODE state is reached via client-side input validation and does not depend on the result of the server request. On the other hand, all the other error states would be reached only after making a request to the server.

In this post, we learned what an FSM is and how to model a complex React component as a system of loosely coupled sub-systems coordinated via the UI State. The FSM allowed us to build a robust system that is understandable, extendable, and delete-able.

We’ve seen some examples of how this is done using React primitives like useState and useEffect. There exist JavaScript libraries like xState and Machina.js which provide a more opinionated framework for creating, interpreting, and executing finite state machines and statecharts.

While the FSM is a powerful design pattern, it is not always the right thing to use for a project. Architectural design is most effective when there is a clear product vision and requirements upfront for how the full user experience should be. Pre-mature optimization could lead to worse code maintainability. Fortunately, the location search experience project was blessed with good product planning and clear design goals that made it possible to break down the problem and architect a robust technical solution.